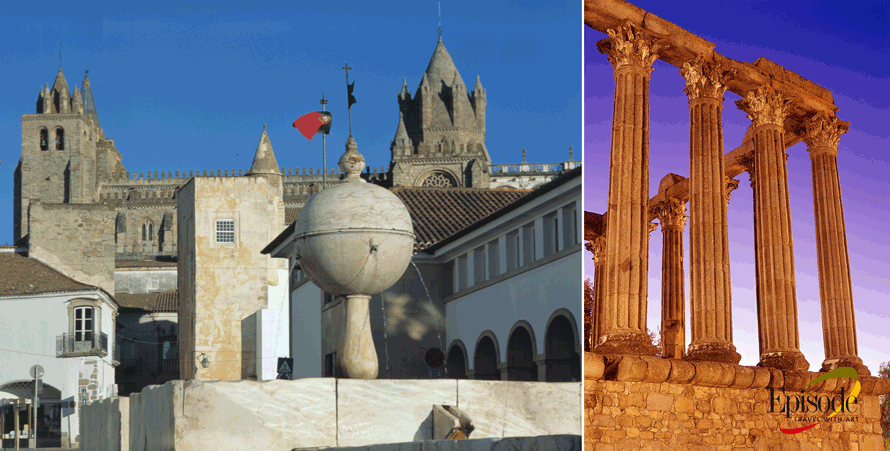 Évora: the capital of Alentejo, a Cultural Tour in Portugal

The roots of Évora, the capital of the Alentejo province, go back to Roman times, and this is just one of the reasons why you should not miss it if you’re planning a cultural tour in Portugal. The ruins of the Temple of Diana, in the heart of the Historic Centre of Évora, are just a possible starting point in a fascinating journey around the museum-city, with many more secrets waiting to be revealed.

One of the highpoints of cultural tours in Portugal, Évora is one of the oldest European cities and yet it retains a freshness that can be felt as you walk along its lovely streets of whitewashed houses and wrought iron balconies. This incredibly beautiful city has been appointed by the UNESCO as World Heritage Site, and represents a confluence of many styles and periods that fascinates the visitors. It is, of course, one of the most sought-after destinations in cultural tours in Portugal but in spite of its merited popularity there are still alternative itineraries to discover.

From Roman Temples to Manueline Style: A Cultural Tour in Évora

Évora, the epicenter of cultural tours in Portugal in the region of Alentejo, has been inhabited since 2 BC, but it was not until the 15th century that it reached its golden age. Since the Middle Ages, Évora had been chosen as Royal Residence, but it was not until the 15th century that the Portuguese monarchs came here more often. Naturally, the architectural landscape responded to this, and these monuments, which have kept their integrity, are today at the center of cultural tours in Évora. Many palaces, churches and convents, such as the remarkable Convent Os Loios and the São João Evangelista church, the Convent of Santa Clara and the Royal Palace were then built, adding splendor to this already splendorous city. The 16th century saw the explosion of Manueline style all over the country, inspired by the Portuguese Discoveries, and Évora was no exception. In 1755, Évora escaped the terrible earthquake that destroyed Lisbon. Thus saved, its monuments had a profound influence in Portuguese architecture in Brazil.

What makes Évora so fascinating is that despite the transformations the city went through in the 20th century, most of its buildings have preserved their structural authenticity, bearing testimony of an extraordinary heritage. A cultural tour around Évora will take you on a historic journey that encompasses Roman ruins, the remains of the Moorish Kasbah, examples of Manueline architecture and the splendor of Portuguese baroque. But if the features and morphology of the city are an attraction for visitors looking for a genuine cultural tour experience, there are other reasons too. Namely, the superb food and wine experiences the city has to offer, which are also a very good reason to plan a visit. If food is culture, then Évora, with its “tascas” and high-standard restaurants serving the best of the Alentejo gastronomy, is certainly a great door to the fabulously creative world of Portuguese flavors. With this mouthwatering aroma, your next cultural tour in Portugal will be even harder to forget!