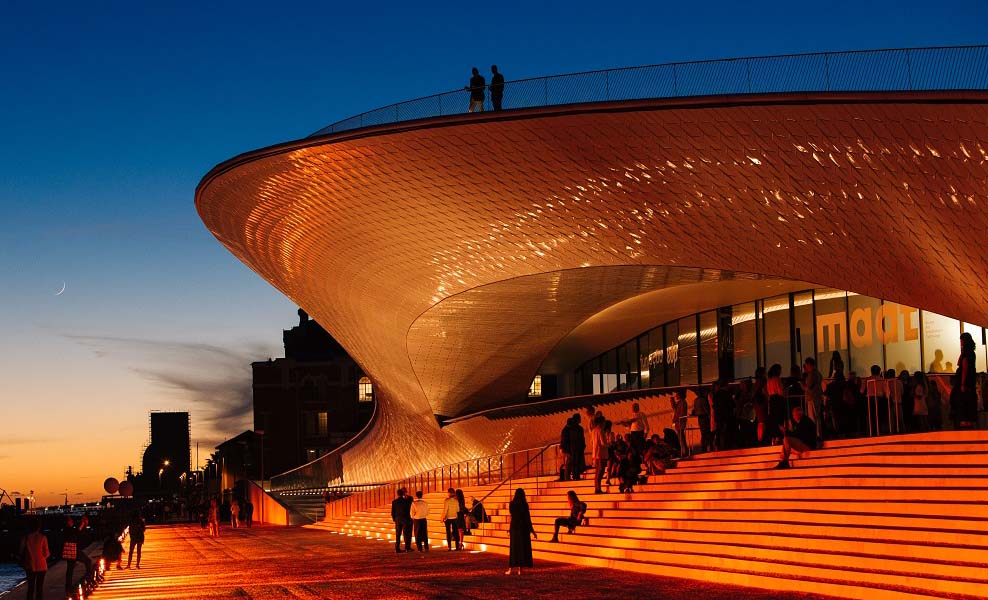 It was a much-awaited opening and the season’s cultural event. Lisbon’s new Museum of Art, Architecture and Technology – Maat, owned by Fundação EDP is the cherry on the cake of an ambitious cultural project. Built in the historical district of Belém, the Maat museum is Lisbon’s new architectural landmark. A superb architectural sculpture which will host 18 exhibitions every year, Maat museum is the new attraction for city breaks in Lisbon.

A project by British architect Amanda Levette (who is currently working on the extension of the Victoria & Albert, in London) Lisbon’s Maat Museum introduces a new, unexpected architectural language in the city. Many people believe that the Maat museum will be to Lisbon what the Guggenheim was to Bilbao. It will be a way of redefining not only the city’s skyline but also its entire personality. Like Casa da Música, in Porto, the Maat Museum in Lisbon is the symbol of a new vibe in the city. Lisbon is already one of the trendiest capitals in Europe. With the fabulous museum now on the list of Lisbon’s must-see buildings, it will be hard to stop this city!

A belvedere over the river

One of the most striking aspects of the new Maat Museum is the relationship the building establishes with the river. Built on the bank of the Tagus River, the organic, futuristic Maat Museum is deeply connected to its surroundings. It literally creates a bridge between the riverbank and the rest of city. The top of the building is a generous belvedere open to the river. From there, you can only see water, so it’s pretty much like being on a huge ship. The 14.936 ceramic plaques that cover the Maat Museum’s façade are one of its most characteristic features. They capture the wondrous light of Lisbon (the unbelievable luminosity that has impressed Amanda Levete) and echo the twinkling of the river’s waters.

On October 5th, the 12-hour non-stop Maat museum opening party signaled the launch of this bold new project. Maat opened its doors to the public and everybody was able to enjoy the new exhibition “The World of Charles and Ray Eames”, as well as the site specific work by French artist Dominique Gonzalez-Foerster, set on the elliptic oval room. Called Pynchon Parks it works as an amuse-bouche for the upcoming exhibition Utopia/Distopia which opens in March at the Maat museum. As Lisbon continues to attract travelers looking for great cultural experiences, and memorable city breaks, places like the Maat museum will add an extra touch of charm and trendiness to an already inimitable city.