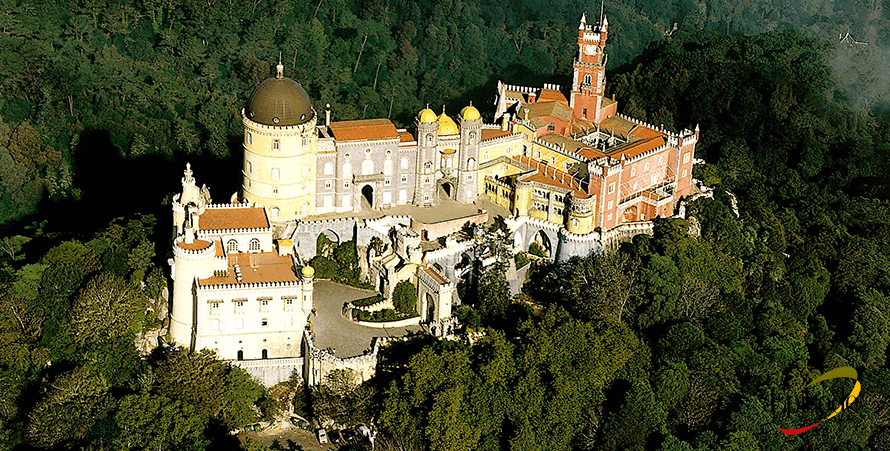 An unforgettable Cultural Tour in Portugal around Sintra

Cultural Tours in Portugal: Discovering the Royal Palaces of Sintra

Sintra has been the refuge of Kings for centuries. The first King of Portugal, D. Afonso Henriques, conquered it to the Moors in 1147 but it was not until 1281 that the ruins of the ancient Moorish Palace were intervened, by King D. Dinis. Architecturally, the palace is a blend of Moorish, Gothic, Manueline and Mudejar styles, and as the true ex-libris of Sintra, with its two conic chimneys, it is a natural highlight in cultural tours in Portugal.

The journey continues as you climb up to to summit of Sintra, along a beautiful winding road sided by luxuriant trees, where you will find the vision of a King’s beautiful dream: the Pena Palace and Park, an icon of Romantic architecture, was built in the 1800’s by King D. Fernando. A place where Nature and Man intersect in a glorious way, Pena is the promise of an unforgettable Cultural Tour in Portugal. Exotic, enchanting, reflecting different influences, the palace is the crown jewel of the mountain, and the park, an obligatory garden tour in Portugal, is a fabulous extension of this reverie. Different and contrasting environments were created, combining the unusual with the exotic, inspired by scenes from operas and distant landscapes and bringing together no less than 2,000 different botanical species.

Sintra is the home of many jewels, but none rivals the originality of the Monserrate Palace and Park. A place of unusual beauty, Monserrate is a must-see in any cultural and garden tour in Sintra. Enriched by many layers of history, Monserrate is Portugal’s first landscaped garden and was originally designed in 1798 by an English merchant, William Beckford, who ordered the plants himself.  Despite Beckford’s love for Monserrate, after his death the estate fell in decay until, in 1856, another Englishman, Sir Francis Cook, bought it. Cook came to live in the property with his family and entrusted the renovation to the architect James Knowles Jr. This was a breath of fresh air. A Garden Tour of Monserrate will unveil the treasures of an exceptional botanical collection bringing together exotic and endemic species, to create surprising scenes along winding paths passing by ruins, nooks, lakes and waterfalls. After this delightful stroll, a visit to the palace built in neo-gothic style with Indian influences, mirroring the eclectic tastes of the period is the cherry on the cake of a mesmerizing cultural tour in Portugal.

If you’re visiting Sintra, don’t leave it without planning a cultural and garden tour to discover the captivating Quinta da Regaleira, an operatic setting imagined by the Italian architect and theatre director Luigi Mannini and brilliantly carved in stone by Portuguese craftsman. Filled with symbolism and mystery, this 19th century estate and park is truly stunning, an architectural extravaganza surrounded by luxuriant gardens to be discovered in an enthralling cultural and garden tour, part enchantment part initiation journey.