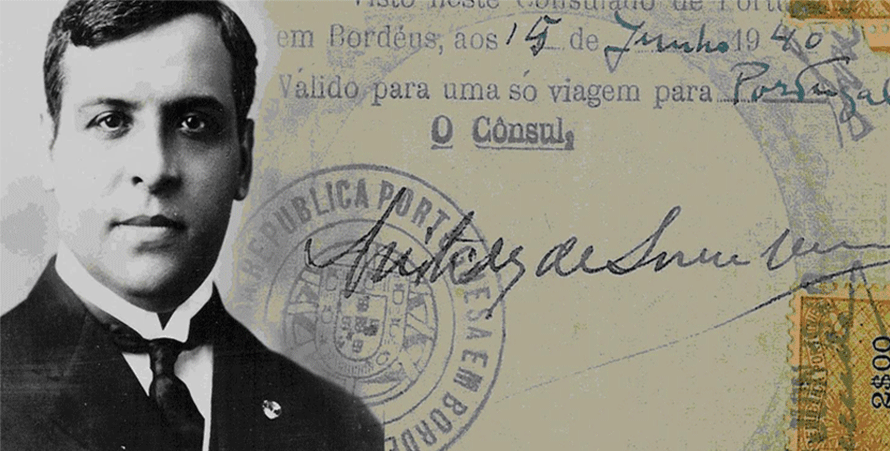 Portugal is a country with a strong Jewish tradition. New archival and museum projects around the figure of Aristides Sousa Mendes are bringing a new light to Jewish Heritage in Portugal.

The “insubordinate” consul and Jewish Heritage in Portugal

Disobedience has never been so bright. So brave and beautiful. In June 1940, Aristides Sousa Mendes, the Portuguese Consul-General in Bordeaux, France. Defied the government of Portugal and the entire Nazi war machine and, over a period of just a few days, issued some 30.000 visas to help refugees. Among them 10.000 Jews. Escape the horrors of Nazism. Known as the “insubordinate consul”, Sousa Mendes was one of the great heroes of World War II. and his heroic act was described by Holocaust historian Yehuda Bauer as “the largest rescue action by a single individual during the Holocaust”. To Sousa Mendes, this was an act of consciousness, and love. “I could have not acted otherwise, and therefore I accept all that has befallen me with love”, he said. http://mvasm.sapo.pt/

Jewish Heritage in Portugal: a memorial museum comes to life

Casa do Passal, in Cabanas de Viriato, Beira Alta. Is an imposing 19th century mansion and was the property of the Sousa Mendes family until it was forfeited to the bank in the 1950’s. Soon, it will be open to the public and an opportunity to discover the depth of Jewish Heritage in Portugal. Classified as a National Monument of Portugal since 2011. Casa do Passal has been reacquired by the family and is now being restored and transformed into a memorial museum to perpetuate the memory of Aristides Sousa Mendes. A great opportunity to recollect memories and stories and continue writing the history of Jewish heritage in Portugal.

The project is well underway. Thanks to a generous grant from the European Union, and the fund-raising efforts of the Sousa Mendes Foundation.

Jewish heritage in Portugal: paying tribute to a symbol of humanism

After too many years of oblivion. The example and legacy of Aristides Sousa Mendes are finally being honored through projects like Casa do Passal, and other initiatives that celebrate Jewish heritage in Portugal and Sousa Mendes’ remarkable humanitarian acts. A virtual museum was created to pay homage to the consul http://mvasm.sapo.pt/ and in the town of Almeida, a new museum, Vilar Formoso Fronteira da Paz  (Vilar Formoso Border of Peace – Memorial of the Refugees and of the Consul Aristides Sousa Mendes). Dedicated to the passage of refugees through Portugal during WWII, will open its doors at the beginning of 2017 with a project by architect Luísa Marques.

The museum, focusing on another intriguing aspect of Jewish Heritage in Portugal. Will be installed in the former train station, where so many anonymous and famous refugees found peace and hospitality on their way to freedom.

In wartime, Portugal was officially neutral, but under the fascist dictatorship of António de Oliveira Salazar, the country was really pro-Hitler. The infamous directive, “Circular 14”, forbid all Portuguese diplomats to issue visas to refugees. Including explicitly Russians, Jews and stateless persons. Sousa Mendes, who declared. “I would rather stand with God against Man than with Man against God”. Bravely broke the rules and guaranteed these persons a safe passage through Spain and then Lisbon, the final gate to liberty. Sousa Mendes’ act of defiance had its consequences. After a trial, he was stripped of his position and livelihood, and the punishment extended to his family (his sons could not attend university). He died in 1954, at the Franciscan Hospital for the poor, in Lisbon. The first recognition came in 1966 from Israel, which declared Aristides de Sousa Mendes a “Righteous Among the Nations.”