Gardens and Palaces
in Lisbon & Beyond

Lisbon is, without doubt, a charming capital city and the ideal point of departure for the exploration of natural environments of rare beauty that, from different eras and across centuries, have served as welcoming gardens and parks in a variety of styles.

On a fascinating tour we will discover the most beautiful historic and private gardens around Lisbon, Sintra and Arrábida, regions that are known for their special microclimate, at the origin of contrasts in landscape, style and vegetation. 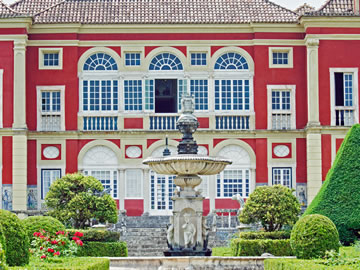 The Era of the Discoveries will be the theme for this morning in the area known as Belém. Here you find the most significant monuments of Manueline art in Portugal … 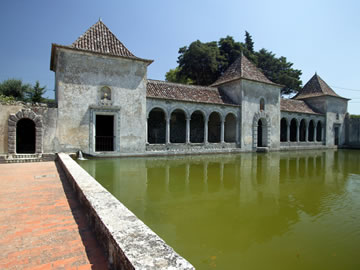 Our third day will be spent in one of the most enchanting and idyllic areas south of Lisbon: the Arrábida National Park. We begin our exploration of this “island” of Mediterranean … 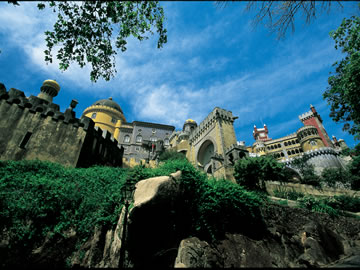 The Atlantic coast up to Cascais, with its surprising beaches and coves, is the start of this morning’s program, as you climb up to Sintra on a road that runs through a landscape of rare beauty. 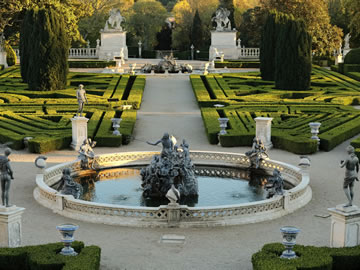 The day begins at the Palace of Queluz, built in 1747 on the orders of Infante D.Pedro, and the royal family’s favorite summer residence until 1794. The French-inspired gardens are divided …

HIGHLIGHTS
OF THE TOUR

The Era of the Discoveries will be the theme for this morning in the area known as Belém. Here you find the most significant monuments of Manueline art in Portugal: the Mosteiro dos Jerónimos and the Torre de Belém – two early 16th Century monuments classified as UNESCO World Heritage Sites. Moving through the Praça do Império, a monumental garden created on the occasion of the Portuguese World Exhibition of 1940, you enter the modern Centro Cultural de Belém to discover the restful olive trees garden with an exceptional view over the river.

Created in 1906, Lisbon’s Tropical Garden remains a well-kept secret in the Belém district. It is made up of giant palm trees, duck-filled ponds, and around 4000 species of plants from around the world, many of them brought from Portugal’s African and Asian colonies. Going up the hill, is another charming garden. In 1765, with the purpose of studying and acclimatizing the numerous botanical species that, together with other exotic wonders, were brought to Portugal on the king’s orders, the Jardim Real Botânico was created as the 15th botanical garden in Europe. The garden, which benefits from a temperate microclimate throughout the year, has a collection of plants gathered from all the botanical gardens of Europe. This collection was enriched with the practical and exotic plants sent from Brazil, Angola and Cape Verde. The collection’s star is a magnificent example of the Dragon Tree (Dracaena draco) – more than 200 years old and 42 meters high.

The tour continues at the unique Palácio and Jardim da Fronteira, a place of real harmony and beauty that reflects the ideals of the Italian Renaissance. The decorative profusion of tiles collected here provides a special surprise – the polychromatic paintwork mixing the Picaresque with the humorous to impressive effect. The fountains and Baroque sculptures of the garden make it one of the most interesting examples of its kind from the 18th Century, and definitely something not to be missed.

Our third day will be spent in one of the most enchanting and idyllic areas south of Lisbon: the Arrábida National Park.

We begin our exploration of this “island” of Mediterranean woods on the shores of the Atlantic at a very special place: the Franciscan friary, built in the 16th Century on the steep slopes of a mountain that still has the power to evoke echoes of centuries-old mysticism. The garden is all the land and sea that our eyes can see from this chosen place where the air is filled with the unmistakable scent of citrus: cistus albidus, Rosmarinus officinalis, Juniperus phonicea… Next we head to a private 18th-century estate, well known for its citrus fruits, that maintains the air of a recreational estate, typically Portuguese. The system of irrigation tanks, water features, gutters and the nora (i.e. a Moorish water wheel) now lovingly restored, are all fine examples of an ancient heritage kept alive.

The tranquil village of Azeitão, nearby, has been a popular summer retreat since the Renaissance and boasts beautiful country estates, of which the Quinta da Bacalhôa, from 1554, is the most spectacular. Built on the orders of Brás de Albuquerque, son of Afonso de Albuquerque, the first governor of Goa, it is the first example of the adaptation of the architectural and landscape principles of the Renaissance to a Portuguese style. A vast garden, with ponds and pavilions, was conceived as part of the overall design of the house. Equally notable are the pictorial and Moorish-styled tiles that can be seen at this beautiful estate.

The Atlantic coast up to Cascais, with its surprising beaches and coves, is the start of this morning’s program, as you climb up to Sintra on a road that runs through a landscape of rare beauty. This land overlooking the sea, covered in luxuriant vegetation, has long seduced poets both from home and abroad. Sintra, the “Glorious Eden” of Lord Byron and ancient summer refuge of the royal court, is today the natural setting for stunning monuments, singular estates, houses and landscaped gardens bounteous with exotic plants. You will climb the winding route to Sintra’s rocky summit, where the most emblematical example of Portuguese Romantic architecture, the Pena Palace and Park was constructed. The palace itself is the crown jewel of the mountain, but the park, planned to imitate the perfection of nature, is even more surprising. Different and contrasting environments were created, combining the unusual with the exotic, inspired by scenes from operas and distant landscapes and bringing together no less than 2,000 different botanical species. Next stop is the magical park of Monserrate. Known as Portugal’s first landscaped garden it was designed in 1798 by William Beckford, who ordered the plants himself. Later, in 1856, the Monserrate gardens and Palace were acquired by Sir Francis Cook, who entrusted the renovation of the then decaying estate to the English architect James Knowles Jr. An exceptional botanical collection brings together species from all round the world to create surprising scenes along winding paths passing by ruins, nooks, lakes and waterfalls. This thrilling stroll leads to the palace built in neo-gothic style with Indian influences, mirroring the eclectic tastes of the period. The final surprise of the day comes with the Regaleira gardens, dating from the start of the 19th Century – an elegant, extravagant fantasy conceived by the Italian architect and theatre director Luigi Mannini and a luxuriant garden evoking an initiation journey through places filled with symbolism and mystery.

The day begins at the Palace of Queluz, built in 1747 on the orders of Infante D.Pedro, and the royal family’s favorite summer residence until 1794. The French-inspired gardens are divided into two distinct spaces: the Grand Garden (or the Garden of Neptune) and the New Garden (or the Garden of Malta), both cut by geometric bushes and set with sculptures inspired by classical mythology, waterfalls and water pools alongside cages with exotic birds and beautiful tiles. This privileged environment, a place of leisure and innumerable royal parties, powerfully evokes the spirit and style of the former royal court.

After so many historical delights, we return to Lisbon to visit the capital’s contemporary gardens.  The gardens of the Calouste Gulbenkian Foundation, a project from the late 1960s, remain incredibly fresh, retaining the power to captivate visitors with its modern beauty. These gardens were carefully conceived as a unity with the buildings, thus creating a clear, continuous perspective between interior and exterior as you will see during our special visit.

Next you head for the Parque da Nações, a five-kilometer riverfront area renovated for the Expo 1998. Here we find some the most emblematic buildings of contemporary Portuguese architecture in Lisbon, integrated in a carefully designed landscape project that occupies a third of the total area. The Garcia da Orta gardens – named after the Portuguese botanist and author of ‘Colóquios’ (1563), a pioneering work cataloguing species of the East and their utility – were laid out in 1998 with the aim of evoking the role Lisbon played in the dissemination of the numerous plants brought to the Portuguese shores during the Discovery Era, and acclimatized here. The garden was projected in cuttings, each one recreating ideal conditions for the plants gathered there from one particular climatic region.

Here we can walk among vegetation from places as diverse as Mozambique and Angola, passing species from Brazil, Goa and Timor, among a series of singular examples of landscape and flora laid out alongside the river Tagus.

If you wish to tailor this tour, you might be interested in knowing all the experiences and travel ideas we have tought of for you: please have a look and let us know if you have any different ideas in mind!

REQUEST YOUR TAILOR MADE PROPOSAL
MENU